PUNO, PERU. THE SURREAL FESTIVAL OF THE VIRGIN ‘LA CANDELARIA’ 2019

La Candelaria Puno. Practising their dance in the streets before the contest

I could see Lake Titicaca in the distance as the plane descended to land at Juliaca Airport, about an hour away from Puno. Although I had been here a few weeks before I hadn’t seen the immense lake from the air and now it stood out, a dark blue, in a never ending near treeless high plateau with mountains in the distance. There is something about these iconic places,the Pyramids, the Pantheon, Everest, New York or Glastonbury Tor that makes you want to pinch yourself to confirm that they are real.

As I exited the airport I saw a taxi driver with a placard with the name Mr Mitchel ..It seemed close enough to Michael..So I went up to him and said Puno? As that would have been the only possible destination and hopped in as he nodded. Already there was a couple from Colombia off on a cruise on the lake and when we arrived in Puno and I asked for the Sol Plaza Hotel instead of the port they realised I had engineered a free ride. I tipped the driver and he seemed happy ..I Wonder what happened to the Mr Mitchel.

I had been in Puno two weeks previously for a trip to the islands on Lake Titicaca and had found out that the ‘Festividad Virgen De La Candelaria’, the second largest festival in South America after Rio and the largest indigenous festival of dance and music was happening in two weeks time. And as luck would have it I would still be in Peru. I managed to book the very last room in the hotel, at very last room rates! and booked a flight back from Lima.

Puno , according to colonial history was established in 1668 by viceroy Pedro Antonio Fernandez De Castro ..although I would have thought that given the fact that travel across the lake from Bolivia and that the Quechua (Inca) and Aymara ( pre Inca) ethnic groups had lived here for thousands of years it was more of a case of colonial rebranding.

And of course the Spanish built a few churches to satisfy the the conquerors religious needs and the attempt to convert the local people. The Cathedral de Puno in the Plaza de Armas is a beautiful and imposing example of colonial architecture which stands above and overlooking the town and Lake Titicaca. Although not as beautiful as Arequipa or Cusco it has a few pretty squares and of course the lake as a backdrop. The thriving town is a warren of streets with little shops thriving from the black market goods smuggled across the lake from Bolivia.

According to Inca folklore it was here by Lake Titicaca that the first Incas, the Quechua, emerged to found the Inca Empire. Lake Titicaca has been an important part of Inca mythology and tradition ever since
The other ethnic group the pre Inca Aymara although located mainly in Bolivia live on the islands of Lake Titcaca and in Puno. Both these groups and the Mestizos ( mixed Indian and Spanish blood) energetically take part in the Festival.

Legends says that when the native Aymara peoples rose up against the Spanish during the great TUPAC AMARU Rebelluion of 1781 the Spanish of Puno were saved by the Virgin Mary. They took the Virgin from the Church ‘Santuario de la Virgen de la Candelaria’ and as they paraded her through the streets of Puno their Swords began to glow like fire as the slaughtered their attackers.

Since then the ‘Virgen’ has been the patron saint of the city and the inhabitants pay homage to her each year with the ‘over the top’ festival of dance & music full of DANZAS FOLKORICAS, with outrageous costumes and religious processions.

Puno La candelaria the procession of the Virgin.

Puno La candelaria the procession of the Virgin.

The festival is a mix of Catholic, Indigenous Andean and fanciful myth. Why the Quechua and Aymara should celebrate being slaughtered by flaming swords I don’t know. The 10% pure Spanish blood population of Peru still rule little differently from colonial times but that is a story for a later blog.

Puno
All dressed up in outfit that took weeks to prepare

I arrived a few days before the Sunday 10th of February, the day of the big parade and dance contest in the town’s stadium. On the the Friday before I walked the streets of Puno but not much was happening.
In a small square there were some young Spanish hippy looking musicians playing panpipes, and in Plaza de Armas there was a trial run of local Indian group fully dressed in their amazing orange outfits practising their particular folk dance. In general the town was rather quiet and I asked myself if this was the right week!

Puno
All dressed up

The streets were quiet so I went to bed about 10pm. I was just drifting off when from the streets below I could hear the loud banging of drums and the sound of about a hundred football referees whistles. I looked out and now there was a constant procession of groups of dancers followed by their incredibly loud musicians. I realised that this was the beginning and it had started when one should really have been asleep.

I dressed, rushed down to street level and was instantly caught up in the crowd and the intoxication of music, dance and singing with lots of loud whooping.
I rushed around looking for the best spot, with some decent street lighting, to photograph the constant procession. Quite frankly it was amazing. It seemed never ending; group after group came by, many of the women in short skirts in the very cold 3900 metre altitude night air. I was beginning to wish it would end but as a photographer I couldn’t go in case I missed something. Finally about 2.30 it petered out.
Next day up I had to get up early as it was the religious procession Of the Virgin.

Puno Peru Procession of the Virgin

It started outside the church and square of St Juan Bautista. The town dignitaries were all on parade dressed to the nines in their best suits and flanked by the army with sharp creases and blancoed belts.
The procession went from the Church, with the effigy of the virgin held aloft, to the Cathedral De Puna in Plaza de Armas, where all morning petals had been strewn in proscibed patterns on the streets.
Here the dancers and musicians accompanying the Virgin were local, wearing ethnic clothes and naturally dyed ponchos and playing Andean pipes, with some wearing feathered headdresses and all holding bunches of flowers. So unlike the night before.

That evening, the last before the contest in the stadium, the best part of the 80 groups from all over the Andes took part in a spectacular cavalcade through the narrow streets of Puno, practising a looser version of their dance moves while drinking plenty of local spirits. It was a chance for friends who lived far apart to catch up and lovers to meet.

The residents of the town bought out chairs and snacks and lined the streets cheering their friends and jumping up for selfies with dancing family members. There were very few western tourists.

Another late night followed by an early start as it was the big day.. the “Gran Concurso de Trajes de Luces” (the Great Competition of the Costumes of Lights).
Walking down to the stadium I bumped into groups of peasants dressed up and holding placards praising El Presidente. I followed them into the towns sports hall. Here the local government officials were herding peasants from nearby villages into seating arrangements in front of the local TV cameras. They were to perform smaller dance routines while the audience waived placards ‘Gracias El Presidente ..Titulos de Propiedad’ Thankyou president for our land deeds ..! As a tourist they wanted to photograph me and I just had enough time to whip out my Che Guevara hat especially for the photo.

Puno Dance in the Sportshall

I arrived outside the stadium for the festivity that UNESCO recognises as an ‘Intangible Cultural Heritage of Humanity’.
Outside the stadium the thousands of dancers and musicians were waiting their turn to enter the stadium to perform their particular dance, which they had been practising for for some months. In general each team choses one of seven traditional dances; usually a variant on the devilishly playful Diablada or the bullfighting dance the Waka Wakawaka Waka.

One of the most well-known dances at the festival is called la danza de la Diablada, which translates as the Devil’s Dance. The dance has roots in the Altiplano of Peru, Bolivia and Chile and in 2003 was named a part of Cultural Heritage of Peru. While the Diablada is not exclusive to La Virgen de La Candelaria, it is one of the most popular because of the ornate costumes and the bright masks worn by dancers representing the devil or forces of evil.

Outside the stadium those dressed were having their photographs taken with family and friends, last minute adjustments to masks and perhaps a little twirl to loosen the limbs and all accompanied with a laugh and a drink.

I queued to buy my ticket to enter the stadium. However compared to the fun outside I found the formal dance dull and left to join the teams waiting to enter outside on Avenue Simon Bolivar where the sun was shining and everyone was happy and excited.

Young and old, all dressed up in their finery.

The girls looking their best smiling at the boys ..there was a frisson in the air with many sneaking a furtive kiss and a selfie ..
It was a coming together, for the most part, of an ethnic and culturally homogenous group that shared a similar past and hopefully an independent future.

It was a fiesta I will always remember 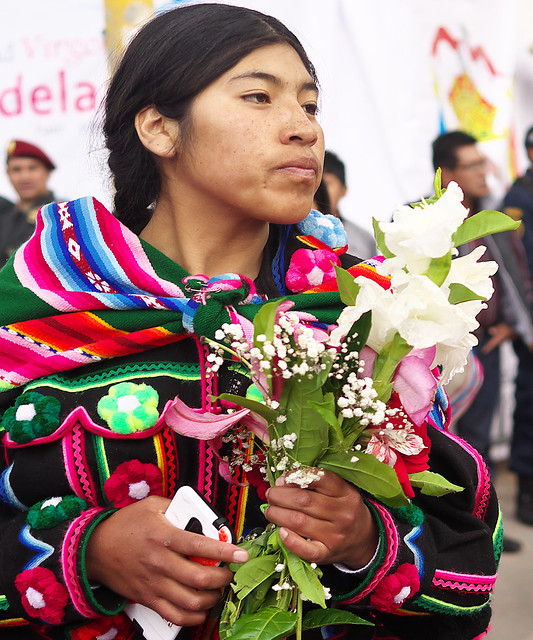 1 Response to PUNO, PERU. THE SURREAL FESTIVAL OF THE VIRGIN ‘LA CANDELARIA’ 2019