LADAKH INDIAN TIBET …AND THE FESTIVAL

It was bizarre and slightly challenging for the senses to move from one culture and region of green rolling hills and thatched dwellings to another with a near barren landscape, Buddhist monasteries, stupas and fluttering prayer flags; but just two days after leaving Nagaland I was 3600 metres up on the Ladakh Tibet plateau.

After collecting my backpack at the airport, struggling a little for breath and surrounded by new faces I sat down to rest at the tiny Leh airport tourist office hoping to get at least a map and whatever information I could glean about the area. It was still only 8 in the morning as the military airport is only open for commercial flights for a brief period each morning. But I got more than I hoped for.Tashi the local tourist officer not only offered me a lift to my hotel but offered, for a very reasonable fee, to act as my guide for the week I was there. Serendipity. And we got on really well together.

It was some five weeks before, while in Kashmir, that I found out that this year the Ladakh Festival was going to be held after the cancellation the previous year while I was in India.
The Hornbill Festival in Nagaland and the Ladakh festival, promoted by both the Indian government and local states have become important for not only the local economy but in fostering identity in two of the poorest and remote parts of India. In Nagaland it has helped to bring together and encourage inter-tribal interaction of peoples collectively called the Naga but with many different languages, dialects and cultures; and in Ladakh it has helped to maintain traditional dress and culture over a wide area of poor farmers.

Historically these subsistence farmers had provided food and alms for the monasteries, and in return sons were educated and younger sons who couldn’t inherit land joined the monk class, the monasteries also acted as orphanages .. the monasteries were and are also seen as the preservation of their culture and links to an afterlife.

The next day Tashi, and I had just found out that the name Tashi means auspicious and fortunate in Tibetan culture, picked me up for a tour of nearby monasteries, starting with Thikse.
The first thing one is aware of is the awesome scenery and even a week later one is still dumbstruck by it’s stark beauty.
At 3600 metres one felt more celestial than terrestial, well at least high enough to be above the weather, cheating the gods as every day was sunshine.
Thikse the largest Gompa, monastery, is a twelve-story complex mix of houses and religious buildings and artefacts. One building, the Maitreya Temple was installed to commemorate the visit of the 14th Dalai Lama to this monastery in 1970; it contains a 15 metres high statue of Maitreya, the largest such statue in Ladakh, covering two stories of the building.
Monasteries are certainly places of peace but also have that ability to make time slow down. Watching the monks prepare the colours and start painting a mandala, a spiritual and ritual symbol in Hinduism and Buddhism representing the universe, I was lost in time until Tashi signalled that perhaps it was time to move on.

Thikse mixing colours for the painting of a mandala

Hemis Monastery is the largest and most important of the ladakh monasteries and has a beautiful central courtyard where pilgrims sit in the sun after visiting the assembly hall ‘Dukhang’ on the right and main temple ‘Tshogkhang’ on the left hand sides.
Apart from it’s importance it has a dubious claim to fame as ‘the monastery Jesus visited in his missing years’.
In 1894 Russian journalist Nicolas Notovitch claimed Hemis as the origin of an otherwise unknown gospel, the Life of Saint Issa, Best of the Sons of Men
Notovitch’s book told an astonishing story. He claimed to have discovered an ancient text in the sacred Pali language that revealed previously unknown aspects of Jesus’s life. According to this text, which Notovitch had translated into French, Jesus had spent his missing years – the years between his childhood and the beginning of his ministry – studying Buddhism in India. At the age of about 30, he’d returned to the Middle East and the life that is familiar to us from the New Testament.
Total fabrication but a bestseller at the time.

A few days later we drove some 125 kms west through spectacular lunar landscapes to Lamayuru Monastery nestling in a green little valley. The road followed the Indus river for much of the way, Ladakh is the only place in India where the Indus flows. A pretty place with unusually a small cafeteria attached.

I climbed above the monastery, suffering from lack of oxygen, to find a series of prayer flags in a Tibetan landscape. Tashi thought I was crazy but the image will always remain with me.

Over three days we toured Ladakh visiting the Kings Palace at Stok, which has a remarkable little museum, visiting tree planting and agricultural projects and of course wonderful monasteries with thousand year old frescoes, and the viewed life of the monks who lived inside. All the time surrounded by the high mountains of Ladakh.

Indus valley and the ever present mountains

Leh, the capital of Ladakh was once an important town on the trade routes from Tibet in the north and India and east to west, but since 1962 and Sino-Indian War ( which ran concurrently with Cuban missile crisis) the border was closed and it’s significance has waned. With a population of about 35,000 it has about 75,000 visitors a year. The old town is a World Monuments Fund listed site, endangered due to climate change.
There is little change in the old town, a few new hotels, except that the main street is being pedestrianised with seating and flower beds, and apart from a few more tourist tat shops it is much the same as it was 20 years ago.
It is not only dominated by mountains but by the old Palace, which is modelled on the Potala Palace in Lhasa. It is an impressive dun coloured nine story building currently being restored. I looked Leh Palace up on Wikipedia and an entry made me think that without planes the world is still large..
Connectivity…The closest railway stations – Jammu, Pathankot and Chandigarh – are a three-day bus ride away.

Leh and the old Royal Palace

The Ladakh festival is the biggest event in Ladakh each year, and by any standards it is quite small, but it is important for the social and cultural life of the whole of Ladakh. It starts with a large scale procession of several cultural troupes from different part of the region and representatives of schools, sports associations which traverses through Leh town ending up on the large Polo ground at the top of the town and below the Palace.

After the inevitable speeches from local politicians there is dancing, singing, traditional music with people wearing colourful traditional Ladakhi dress. This is important to keep alive the different styles of clothing from the regions.

At midday and at 3600 metres the sun is fierce and with the slightly atonal tibetan music of drums and trumpet the atmosphere is intoxicating, exciting even. This spreads to the groups of young people from the different villages, some along way away, who because of snow cutting off most areas and the lack of transport do not meet often. The look on their faces is a far cry from the world weary and cynical expressions of teenagers in the west. One gets caught up in, really, the joy and fun of the situation.

The next day is the masked dances in the centre of town..These ritualistic mask dances are often in Ladakh chosen from the life of the Buddha and the moral conveyed is the victory of the good over the evil.

I, however couldn’t really understand the significance of the dance or the masks involved, except it was interesting to notice the skulls around the top of the mask were similar to the skulls used in carvings by the headhunters of Nagaland I had seen a week earlier.
The music for the dance was mainly tibetan drums.

The crowd was nearly all local, with only a handful of tourists and the meaning of the dance was obvious to them if not me.

Ladakh festival at the Masked dance

The highlight for many of the Ladakhis was the polo match and in fact it was closing act of a four day festival that included local handicrafts, lessons in mandala painting and many cultural exhibitions that aim to preserve local culture.

I joined the many as we walked through the town up to the polo ground. This large expanse below the Palace is officially called the Polo Ground although it is a general purpose open space and was laid out in 1885, although Polo has been played in Leh since the seventeenth century.

The atmosphere was more like a football match with a noisy, knowledgeable and enthusiastic crowd; loud speakers relaying the state of play and players. I ventured too close to the edge of play only to see through the lens of my camera half a dozen horses heading straight for me…I escaped in time. As usual the team I decided to support Leh Town, lost. But it was interesting to see a game that is seen in the west as elitist is here a sport for anyone who owns a pony (perhaps not that many though)

Ladakh is a special place. The festival is still an event mainly for Ladakhis and although there are tourists for the most part they are from other parts of India. It is well worth visiting during the festival.

All photos can be seen at 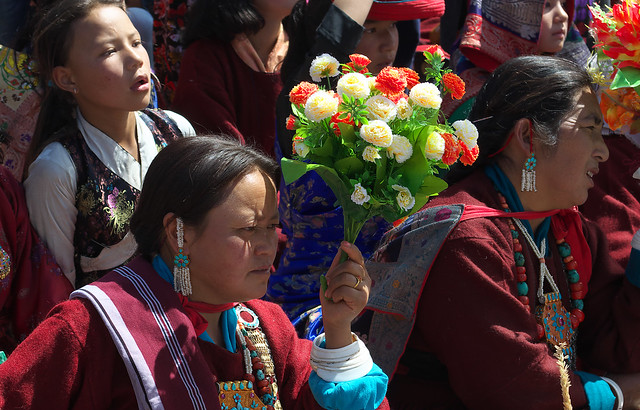 Photographs can be used freely for non commercial purposes with permission

1 Response to LADAKH INDIAN TIBET …AND THE FESTIVAL