NAGALAND INDIA .. FROM HEADHUNTERS TO BAPTISTS

Flying to Dibrugarh Airport in Assam took us over the devastating flooding of the Brahmaputra river, India’s only ‘male’ river ..pretty as it looked from the air, with the sun glistening on the water, underneath were 500,000 acres of destroyed crops and up to 50 dead. The floods have been a more regular occurrence since the 1950 earthquake and continual deforestation.
Vaivhav Todi of Greener Pastures was there to meet me. He was the organiser of my trip to Nagaland.
Dibrugarh is known as the Tea City of India, and the town is a major trading centre, with street after street of small shops, crowded in the evenings with relatively well off customers.

The next morning we set out for Nagaland, Keviphrulie Iralu my guide , but affectionately known as Aphriilie Iralu, and our driver in the large four wheel drive.

Stopping for lunch of sticky rice I thought it might be my last, a word of advice, drink plenty of water with sticky rice. Early afternoon we reached the border of Nagaland , specifically Mon district. Although there is no restriction on non Indians visting Nagaland one has to go through police control and hand over photocopy of passport.

The roads deteriorated from there on. We stayed the night in Mon village in the middle of Mon District. I stayed in a comfortable Guest House, eating an excellent dinner on the terrace overlooking the countryside and watching the sun going down in total tranquillity.

It was a year before while in Delhi while visiting the National Museum, I came across, tucked away at the top of the building, in the rather forlorn Ethnographic section, some photographs of the Naga in about 1950..not only did the photos remind me of the Nuba but there was something familiar about the Naga and that took a longtime to work out.
While researching the Naga I came across a link ..Look and Learn January 1964 ‘Headhunters of the Naga Hills’ ..(and it was the only ‘comic’ our school allowed) I can vaguely remember reading and the fear I had of the idea of being decapitated.

Headhunters of the Naga Hills Look and Learn 1964

Early next day we headed up to Longwa, a village on the Burmese border, well in fact half in Burma, and the inhabitants have dual Indian Myanmar citizenship.
Although the village is only about 25 miles away because of the potholed mud roads it is nearly a three hour drive.

The drive is like taking a trip back in time. We encountered no other cars, only someone struggling on a motorbike. The countryside was of a vivid light green punctuated by beautiful thatched dwellings that blended in so well with the landscape.
We came across occasional groups of villagers, mostly women off down the valley to the rice paddies near the rivers, mostly shy of a westerner.
The Naga leave a very light ecological footprint on the planet.

Konyak villagers off to the fields

Longwa village at about 900 metres has far reaching view into Myanmar and India..At it’s highest point is the enormous thatched dwelling of the King. Konyaks have hereditary chiefs known as Anghs, and the institution of Anghship exists only among the Konyak Naga.
The old king had died a few months before and the new king was a shy gentle man. He ruled over some 70 villages both in Nagaland, Arunchel Pradesh and Burma, although most powers had passed to government institutions on both sides he received help in tending fields and any needed rebuilding of houses. We met his second wife who is a princess from a tribe in northerly Arunchel Pradesh.
There was much smoking of opium among the King’s family I read somewhere it was necessary to curb their tempestuous nature.

The new King of Longwa looking to his lands in Myanmar

Headhunting was part of the tribal culture up until the early 1960’s and ended with the arrival of the Southern Baptists. There are two theories to why headhunting ; the first being the power it ascribed to the warrior who had taken the head , the second that
the fertility of their crops was dependent on the number of heads taken.

Although it said that headhunting died out by the early 60’s I met a king from another Konyak branch from Myanmar who must have been about 60, who showed me his tattoos that proved that he had taken three heads, and that must have been in the 1970’s.

The King or Anghs large thatched dwelling is actually half in India and half in Myanmar.

It is a mini palace to some extent with a large entrance room with a throne chair, old shields on the wall with the heads and antlers of many beasts, a few bedrooms,a opium smoking room, a large kitchen with the second wife at the fire, and at the very back a granary with, while I was there girls grinding some millet. A hive of activity.

Outside of Mon Township we stopped at a little village that apart from the lack of a tarmac road and a public house would not be out of place in the English countryside. Each beautiful thatched house had gardens full of flowers. Everything was so green that photosynthesis must have been on steroids.

The village reminded me of ‘News from Nowhere’, with the men weaving mats, the children high jumping and the women out walking wearing their handcrafted necklaces..a rural idyll.

Kohima is the urban soul of a predominately rural Nagaland. It has strong connections with Britain, first as the administrative centre of greater Nagaland and secondly remembered most for one of the defining battles of Second World War.

I stayed in a small nineteenth century British bungalow now an hotel, but it was first the residence of Captain Butler the first Political Agent to Nagaland. Today in the small lounge hangs the board with the list of all the Political Agents and later Adminstrators up to Independence.

The battle of Kohima is little heard of these days but it was key to the war in the East. Winning did mean saving India and the Raj. Many Indians from mainly Bengal under Chandrar Bose and even more Burmese, treated apallingly by the British, joined with the Japanese on the assault of India. Nagas didn’t take part in the actual fighting but were guides, porters, spies, stretcher-bearers and even dug trenches for the British and a couple of thousand were thought to have died.
The battle is often referred to as the Stalingrad of the East. In 2013, the British National Army Museum voted the Battle of Imphal and Kohima to be Britains Greatest Battle.

Kohima is a hilltop city with both Baptist and Catholic Cathedrals, although the Naga are mainly Baptist and Asia’s largest Christian church ( Baptist) has just been completed near Kohima. It is the real capital of the Naga, with the Administration, schools and a University for the whole of Nagaland.
The doors or gates near the old part of town depict the dates of the proclamation of Independence and the start of the armed struggle for an Independent Nagland, with a gun depicted in the carving.

The city is not too big and although a little ramshackle is a pleasant place better than most Asian cities.

The Angami Naga, one of the largest Naga tribes live in the Kohima district and like most of Nagaland are predominately Baptist.

Converted by American missionaries some 60 years ago led to the end of traditional beliefs and headhunting. Nagaland is known as “the only predominantly Baptist state in the world” but there a few, fortunately, who still cling to traditional beliefs.

Traditional Naga religion or tribal belief is a multifaceted religion with the combination of theism, animism, supernaturalism, superstition, shamanism and lycanthropism, (the ability to take the form of a wolf).” The indigenous Naga religion is a belief in the existence of spirits. Every place is associated with a spirit and if there is a place there will be a spirit of that place who is supposed to be feared and propitiated. A plurality of religion makes the world a more interesting place, the Hindu festivals in India are a joyous occasion and so much fun, and the Naga belief system needs to be safeguarded.

There are sixteen main Naga tribes and many subtribes, each with different language and tribal political structure, living in a huge area encompassing both India and Burma. The British on Indian Independence drew a line straight through Naga lands splitting the Naga and some tribes into 2 seperate countries. The Naga see their lands as Naga lands not the Naga in Burma or India. The Naga sensing betrayal by the British, they were promised a land under British Protectorate, declared Independence a day before India was given Independence. The effect of an Independence war and the emergence of the Baptist Church has led to a global Naga consciousness, and a diminution of tribal importance with religion and the English language defining the Naga.

Although the war of Independence is currently on the back burner, the Indian Government has spent more in the North East of India recently, realising that coercion is not the best way to keep this geo politically important region firmly in its sphere of influence, the insurgency has led to some 100,000 deaths since 1947. Naga Independence groups have been funded by both Pakistan and China, initially with leaders being trained in China.

With Religion and Politics out of the way that only leaves football. India has given free satellite subscription to the Naga region and the English Premier league is followed avidly every weekend.

Visiting villages within a few hours drive of Kohima one was aware of the independence of the Naga. Here there are few thatched dwellings but more solid wood houses with typical decoration of bull horns and Naga symbols.

There is an abundance of cotton and weaving is a mainstay of supplementing income. The Custom in Nagaland is that every girl who attains the age of marriage, should be able to spin and weave.

There is little excessive non essential consumer tat inside houses with the kitchen being the main room of the house. Tea is drunk everywhere and here in the Naga hills along with Assam is where, what is known as milk tea came from, as opposed to green and other teas from China.

My favourite homestay in Kohima district, a few hours drive from the city, was in a small village nestled in the hills with farmers Letso and Sotuno. It was so much fun.

Letso ..the chef at the best homestay

Letso was the cook and the food was excellent. Sotuno was the entertainer and she spent the whole time laughing. With the exceptional Aphriilie Iralu as translator, he stayed as well, it was a memorable time.

The view from Khonoma Village

I spent an afternoon watching the local farmers working in the fields, and after, the hard walk up from the rice paddies to the village.

Khonoma Village Returning home after day in the fields

Khonoma Village Returning home after day in the fields

Nagaland is a beautiful tranquil place for exploring and realising that perhaps there is an alternative and different way of life.

Mike Wooldridge doyen of BBC correspondants while covering the Naga fight for independence in 1997 wrote “If you are from Britain, you will be asked by some, with great courtesy, to convey to the Queen a request that she should apologise for Britain letting the Nagas down.”

The Nagas are not Indians their territory is not part of India. We shall uphold and defend this unique truth at all costs and always.

Photos can be seen at click on picture below. 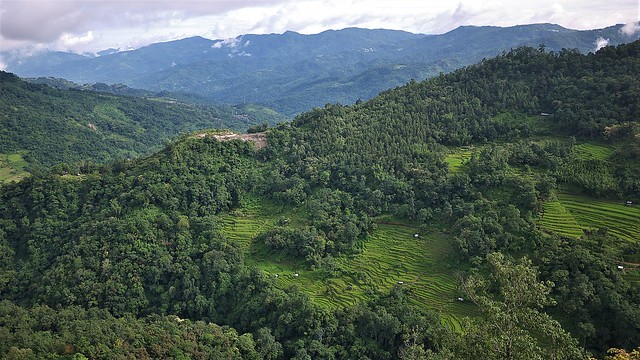